esearchers and companies are exploring lots of avenues for improving how robots and artificial intelligence systems work – and technical advances are important. Chief Analyst of ‘5 Jewels Research’, Mr. Sumant Parimal, a Globally recognized ‘A.I.’ (Artificial Intelligence) Thought Leader has said that if every house hold in India has at least one Robot adopted, then it may increase per house hold income earning potential up to 60%. 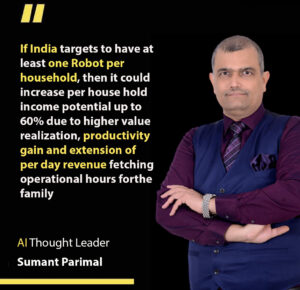 In a recent article published Mr Sumant said “Robot density in India is right now at the lower level compared to the Countries like Japan, Korea, Germany. Higher Robot density and A.I.adoptions going to help increasing the productivity and GDP Per Capita of the country. If India has to attain $5Trillion+ economy, then like Mobile and Internet Penetration, A.I. and Robotics penetration should also go up”.

“If India targets to have at least one Robot per household, then it could increase per house hold income potential up to 60% due to higher value realization, productivity gain and extension of per day revenue fetching operational hours forthe family” Mr Sumant stated further.

“In future, there is going to be A.I.and Robotics adoption revolution around the World, for which we have to build Research to Development to Production capacitiesand India should lead this A.I.-Robotics revolution”Mr Sumant said. 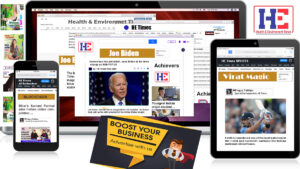 Get together : Enrich your life and improve...

Hand of good: UDGAM’S rise to challenge in...