“As India has set an ambitious target of becoming $5 Trillion economy, so even this kind of economic value loss due to Internet shutdowns during Law-and-Order problem needs to be eliminated by using Artificial Intelligence (A.I.) based targeted Users and Apps. Level responses by the various Govt. agencies involved in Law-and-Order enforcement.

India’s constant internet blackouts have taken a huge toll on its economy. Internet shutdowns left Indian businesses without hundreds of hours of vital internet access, costing billions in lost revenue. Chief Analyst of ‘5 Jewels Research’ , Sumant Parimal, a Globally recognized ‘A.I.’ (Artificial Intelligence) Expert has said that A.I. (Artificial Intelligence) to be used for eliminating Internet Shutdowns during Law and Order Problems in India and around the World . 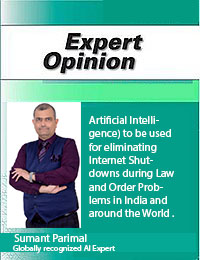 He was commenting on recent Internet Shut downs imposed by Law-and-Order enforcement agencies in India and neighboring Myanmar. “Present days complete Internet Shutdown by the Law and Order enforcing agencies is a Network Level primitive response against misuse of Internet by the suspected users, which leads to the complete collapse of the on-line services including many essentials ones for even those who are not part of Internet misuse. As per one estimate for year 2020, this kind blanket Internet shut downs around the World caused economic loss of over $4B, in which India’s economic losses contributed 70% to the tune of $2.8 B, which is highest around the World. India is continuously appearing in the list of top most countries where Internet Shutdowns hours were highest since last two years as per Top10VPN.com reports, due to which India lost around 0.2% of GDP worth economic value in last two years along with its negative impact on country’s Brand Equity” Sumant Parimal said.

“As India has set an ambitious target of becoming $5 Trillion economy, so even this kind of economic value loss due to Internet shutdowns during Law-and-Order problem needs to be eliminated by using Artificial Intelligence (A.I.) based targeted Users and Apps. Level responses by the various Govt. agencies involved in Law-and-Order enforcement. Offensive contents and messages circulating on certain Mobile Apps. and Social Media Apps. of certain users are of major threat towards law-and-order enforcement. But for controlling those few contents and messages circulated by few users, complete Internet blackout is not a targeted response, as it shut downs access to other essential services like education, banking, health care, which are digitally delivered by many Govt. and Private agencies and required for day to day working of the people as many transactions are moving on-line due to Digital India initiatives and also due to prevailing Covid pandemic.

An accurate response to stop abuse of Internet is to increase surveillance at the App., content and users’ levels by using A.I. based content analysis, profiling and monitoring systems to take targeted actions against selective contents, Apps. and users who have been profiled as possible threat by such smart A.I. systems. This kind of A.I. based smart, self-learning and self-acting systems shall make sure that offensive and law and order threatening messages and content don’t gets propagated even without Internet Shutdowns, which essentially means thousands other essentials services like education, banking remain accessible to the people and businesses minimizing economic loss and public inconveniences due to unpredictable Internet Shutdowns” Sumant stated further.

It Could Have Been Better To Spend U.S....

India-China Relations : Galwan and Beyond