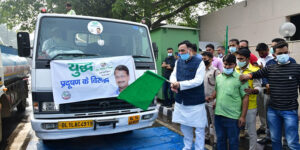 He added that smog guns have been installed on a large scale across Delhi; water being sprinkled on the roads all over Delhi through tankers. Violation of norms found at 92 construction sites in Delhi, orders have been given to seal all of them. He stressed on the fact that when the incidents of stubble burning increase in Punjab and Haryana, then its effect is clearly visible throughout Delhi as well. Environment Minister further flagged off tankers today for sprinkling water across Delhi to control dust pollution.

While flagging off the tankers outside the Delhi Secretariat, he said “Chief Minister Arvind Kejriwal had launched the Winter Action Plan a month ago to firmly fight against air pollution inside Delhi. Since then, the Delhi Government has been working with the people of Delhi to control the pollution in Delhi. 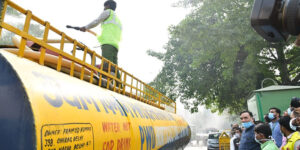 He said that the way the incidents of stubble burning increased in Punjab and Haryana on Diwali along with certain elements bursting crackers in Delhi on purpose, the pollution levels inside Delhi have increased significantly.

Replying to a question, Environment Minister said, “the people of Bharatiya Janata Party are publicly saying that it was wrong to ban firecrackers. The BJP people themselves are shouting that we are in favor of bursting crackers. No other proof is needed for this. The Delhi Police had to take action against those who burst crackers on Diwali.”

Role of Youth in Reducing Single Use Plastic...

E-waste generation is going up with the increased...

Developing D-STPs in parks are an initiative to...