Deputy Chief Minister Manish Sisodia motivated the students on the occasion and said, “This is for the first time in the history of India that we have more than 400 students sitting in the auditorium and VCs of top state universities are directly connecting with them for providing admission in their university. This never happens in IITs, IIMs, Harvard or MIT but it is happening in Delhi. This has become possible because of the hard-work and entrepreneurial abilities of students who have demonstrated entrepreneurship mindset and successfully created their own business models. This opportunity of direct admission to more than 400 students will give them an exposure to take their businesses to further heights and get the guidance from the best faculty and experts for the same”

It is to be noted that out of the 50000+ ideas by 3 lakh students, 126 business ideas had made it to the finals. These 126 teams had 774 students, of which 416 students were in Class 12 who will be passing out of school this year and will set upon a new journey. These students are being given the option of getting direct admission in some of Delhi’s top universities, which include NSUT, DTU, IGDTUW, DSEU, DPSRU, Ambedkar and IIIT-D. 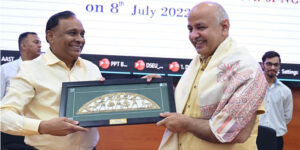 Manish Sisodia said that from here onwards the journey of these Business Blasters is very important because whatever step they take now will have an impact on the country’s economy. Government and schools have held their hands till here but from here onwards they have to decide whether they want to be a job seeker or a job provider. He said that countries have been providing education according to the needs of the period. There was a time when countries needed young soldiers. Then the leadership decided that it is important to recruit them directly from the schools. Students who had passion to fight for the nation started preparing at the school level and joined the armed forces. Today the country is safe because of their efforts. “Similarly today, our country has a different goal, of rising up as a top global economy and getting rid of the problem of unemployment,” he said.

The Deputy Chief Minister said, “Every student of this cohort of 400 should have this in mind that whatever they do in future now will have a direct impact on the country’s economy. They must keep in mind the rising rate of unemployment in the country, decreasing per capita income and crippling economy of the country so that they can work towards improving the economic condition of the country. The universities who will take up these students need to ensure that instead of producing job seekers, they have to now prepare job providers. I will be happy if they will be able to provide jobs worth crores to other people, rather than securing one for themselves.”

He further said, “The country is reeling under serious issues of unemployment and underemployment. About 12 crore people are unemployed in the country today and 27 crores people have an income of Rs 35 per day. In such a situation youth standing in a queue for a job could not be the power of the nation. This team of 400 students is very important for me because I see them as a solution provider for this problem of 39 crore people of India. If countries like Japan and Germany who fought the war at the same time when India got freedom can be a developed nation today then why not India. I need students who can provide jobs to lakhs of people by creating companies like Google, Microsoft in India.”

Now, we have to resolve all our problems through education by taking the path of entrepreneurship, Manish Sisodia added.

Speaking about the courses being offered by universities Manish Sisodia said that these 416 students are being offered admission for nearly 40 courses such as BBA in Innovation, Entrepreneurship and Venture Development, BBA in healthcare, B.A in digital media and design, B.Sc data analytics, BCA etc. For most courses the eligibility criterion is basic requiring about 50% marks in class 12th. There are specific added eligibility for a few technical courses, such as science stream requirement for BBA healthcare course at DPSRU.

How did Business Blasters start?

The Delhi government’s Business Blaster programme is an extended practical component of Entrepreneurship Mindset Curriculum being implemented in Delhi government schools. It is the first ever school start-up initiative on such a large scale which was started from a government school in Khichripur in 2021. Under this program students were given the seed money of Rs 1000 each initially to set up their businesses. After seeing the interest of students the programme was expanded for class 11 and 12 in all Delhi government schools. The seed money was also increased upto Rs 2000 each student in a team. Along with this students were provided with mentorship from well-known entrepreneurs and experts in the field.

In the first season of the programme, the Directorate of education received 50,000+ ideas from over 3 lakhs students. But out of this only 126 best business ideas could make it to the final Expo, held on March 5, 2022, where students pitched their ideas to the investors from all over the country and procured letters of intent worth crores for their ideas.

Where does it stand now?

As the Business Blasters has moved on to the second season, most of these students plan to continue their businesses which they started under the BB program. There are 60 teams out of the final ones which have been incubated under the newly set up incubation cell at Delhi Skill and Entrepreneurship University. Students from 126 teams who were in class 12 have been offered direct admission in the state universities by the Kejriwal government.

Also, from this year onwards the Business Blaster programme will also be implemented in some of Delhi’s private schools too. 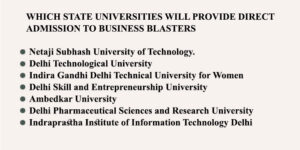 Yoga not a one day affair for Delhi Government; we mean business; ready to scale up Dilli Ki Yogshala radically: Arvind Kejriwal

Youth Parliament would go a long way in...